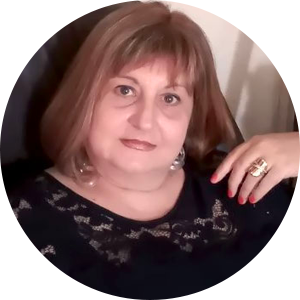 She has a soprano voice and is a classical singing teacher at the National School of Arts ‘D. Hristov’ – Varna.

She was born on 27 August 1964 in Varna, and she graduated from the National School of Arts ‘D. Hristov’ in classical singing in 1983. From 1985 to 1990 she studied at the State Music Academy ‘Pancho Vladigerov’ in the opera singing class of Konstantsa Vachkova.

She took part in numerous performances of the conservatory’s educational theatre and in 1990 she graduated with honours from the academy having already played several roles.

In 1988 she debuted on the stage of Varna Opera in the role of Norina from Donizetti’s opera Don Pasquale. Preferring to sing on the opera stage, she was a soloist of the Plovdiv Opera until 1992.

Her repertoire includes over 20 opera titles, as well as Beethoven’s 9th Symphony and Mozart’s Requiem.

Over the years she has given many chamber concerts of Bulgarian, French, Russian music, Italian canzonettas, songs by Verdi and others.

She has sung on opera stages both in Europe and outside the old continent, such as Greece, Cyprus, Turkey, Egypt, Germany, Holland, France, Italy, Spain, Portugal, Monaco, Russia, Lithuania and others.

In 2007 she released a CD of Russian romances by Tchaikovsky and Rachmaninov with pianist Todor Petrov.

Popstar and performer of some of the greatest Bulgarian songs.